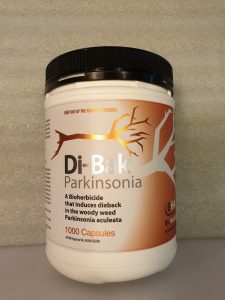 BHA is the first company in Australia to commercialise a proven, naturally-occurring bioherbicide (Di-Bak Parkinsonia) for the control of  Parkinsonia aculeata, a Weed of National Significance (WoNS).

Developed over fifteen years by researchers at The University of Queensland, Di-Bak Parkinsonia capsules are manufactured by BioHerbicides Australia (BHA) and are available commercially. APVMA Approval No:68348/58200

Di-Bak Parkinsonia is a biological herbicide produced in capsule form,
containing a combination of naturally occurring fungal pathogens that kill off the woody weed by inducing dieback disease.

The capsules are inserted into the tree with an easy to use hand-held applicator where they are sealed with a plug ensuring safe and effective placement. The capsule dissolves, releasing the biological agent into the vascular system of the tree, killing it from the inside. The process offers a direct hit on the weed with minimal environmental impact.

Di-Bak Parkinsonia was trialled with cattle producers, government departments and NRM groups, and is supported by Meat & Livestock Australia.

To purchase Di-Bak Parkinsonia products get in touch with our distributor, ADAMA to find your nearest retail store.

Download our guide on Transporting and storing Di-Bak Biologicals here.

Click on the links below for fact sheets containing further information.